Why should you follow this blog? What makes it unique? Well that is an excellent set of questions. We try to post some fun stuff on the blog and lots of pictures of Lucy (the title character of the blog) and an occasional video or two. We write about things that matter to dog lovers and especially boxer dog lovers. So, here are the details of who Lucy the White Boxer Dog is...
Lucy the white boxer dog has been in our family for a little over six years now. She is not truly white but rather what is referred to as a "check boxer" due to her spots. She is not an albino! She has brown eyes and splashes of black on her in addition to her spots. She is a full blooded boxer. She is also extremely healthy with the exception of having a sensitive stomach.
Want to learn more about Lucy and the things we write about her, follow her blog. Better yet, check out some of the older posts. There is a lot of information on the care of boxers and dogs in general... We look forward to see your comments on some of the posts... Happy blogging to all! 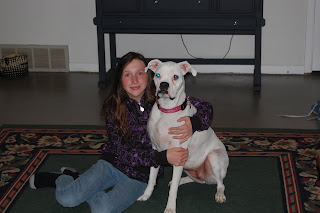 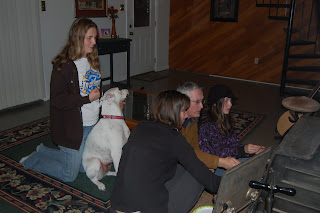 Our friends from San Diego came out to visit a week or so back. These are really great friends that we have been separated from by time and distance due to military service and the hassles of life. It was one of the highlights of our stay here in Memphis to have them reunite with us. Its kind of funny how life changes your situations.

When we were together before at an Air Force base in the frozen tundra of North Dakota, Terri and I were in mist of raising our three kids. As a matter of fact, our kids were younger then, than the our friend's kids are now... Back then our friends were freshly married with no kids yet. What a role reversal with Terri and I being "empty nesters" and our friend now in the middle of raising a family. My how time changes things! Now with that said, I've got to tell you about how Lucy reacted to the visit.

I think dogs have a sixth sense about people. It seems from the time that our friends entered the door Lucy was attached to them. I honestly think Lucy could sense the excitement that Terri and I had about our friends coming to visit! She instantly took to both of the our friends kids, and why not, they're great kids! Anytime the girls were in the house Lucy wanted to be right there with them. She accepted them right into the pack.

Now that our friends have left I think Lucy misses them... I know we do! The house feels just a bit bigger and bit emptier. When they first left, Lucy spent a good deal of time in the room where the kids were sleeping, as if waiting for them to return in order to spend time with them. It warms me to think that our old friends are now Lucy's new friends! I trust they return for another visit soon, I know Lucy's thinking the same... Pals!
Posted by Bob Novotney at 8:05 PM No comments:

A friend of mine sent me the following statistics. To some this is a reflection of the state of things in United States of America. Just thought I’d post these thoughts and see what comes of it…

The U.S. Post Service was established in 1775 - they've had 234 years to get it right; it is broke, and even though heavily subsidized, it is not able to compete with private sector FedEx and UPS services.

Social Security was established in 1935 - they've had 74 years to get it right; it is broke.

The War on Poverty was started in 1964 - they've had 45 years to get it right; $1 trillion of our hard earned money is confiscated each year and transferred to "the poor"; it hasn't worked.

Medicare and Medicaid were established in 1965 - they've had 44 years to get it right; they are both broke; and now our government dares to mention them as models for all US health care.

AMTRAK was established in 1970 - they've had 39 years to get it right; last year they bailed it out again, as it continues to run at a loss.

This year, a trillion dollars was committed in the massive political payoff called the Stimulus Bill of 2009; it shows NO sign of working; it's been used to increase the size of governments across America, and raise government salaries while the rest of us suffer from economic hardships. It has yet to create a single new private sector job. Our national debt projections (approaching $10 trillion) have increased 400% in the last six months.

"Cash for Clunkers" was established in 2009 and went broke in 2009 - - after 80% of the cars purchased turned out to be produced by foreign companies, and dealers nationwide are buried under bureaucratic paperwork demanded by a government that is not yet paying them what was promised.

So with a perfect 100% failure rate and a record that proves that each and every "service" shoved down our throats by an over-reaching government turns into disaster, how could any informed American trust our government to run or even set policies for America's health care system - - 17% of our economy?

“I predict future happiness for Americans if they can prevent the government from wasting the labours of the people under the pretense of taking care of them.”
-- Thomas Jefferson
Posted by Bob Novotney at 8:27 AM No comments:

Welcome to my blog

Add blog to our directory.