Why should you follow this blog? What makes it unique? Well that is an excellent set of questions. We try to post some fun stuff on the blog and lots of pictures of Lucy (the title character of the blog) and an occasional video or two. We write about things that matter to dog lovers and especially boxer dog lovers. So, here are the details of who Lucy the White Boxer Dog is...
Lucy the white boxer dog has been in our family for a little over six years now. She is not truly white but rather what is referred to as a "check boxer" due to her spots. She is not an albino! She has brown eyes and splashes of black on her in addition to her spots. She is a full blooded boxer. She is also extremely healthy with the exception of having a sensitive stomach.
Want to learn more about Lucy and the things we write about her, follow her blog. Better yet, check out some of the older posts. There is a lot of information on the care of boxers and dogs in general... We look forward to see your comments on some of the posts... Happy blogging to all!
Showing posts with label flying stories. Show all posts
Showing posts with label flying stories. Show all posts 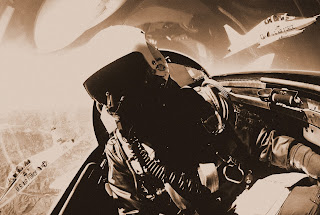 The command was “Eject – Eject - Eject!”

It seemed like an eternity after pulling the handles for the ejection seat to fire. Time slows when you’re having fun the pilot thought to himself! Watching with great interest, the pilot observed his feet drawn in by the stirrups and the seat slammed back. The canopy that was once protecting him from the elements disappeared from view. Suddenly the force of twenty-one G’s pressed him to his seat as the blast of the veneer rocket sent him upward and away from the aircraft. This is a once in a lifetime ride; I’d better make the best of it the pilot thought.
Everything was working as advertised in training.

Although traveling at more than 350 knots at the time of the ejection, he had hardly noticed the violence of the windblast or the loss of his flight helmet. Even with the distraction of the loss of his helmet, his training took over.

Once kicked free of the ejection seat, he started the routine taught to every pilot who finds themselves in the situation after getting a good chute. The routine came automatically – Canopy, visor, four-line and finally, prepare for landing.

At the end of every flight, there is a landing. In this case - a parachute landing! The PLF (parachute landing fall) as known to many), is designed to reduce the shock of hitting the ground. It distributes the load of impact to multiple points of the body.

In reality, most pilots look at the termination of a flight in this situation as having two possible outcomes. You can make a PLF or you can make a PFL (poor f*@king landing). The real difference here is, the PLF is taught in training, the PFL is how you should not accomplish the task, as something always manages to get your attention when you come to a full stop.

The C-9 canopy (parachute) is not noted to be the most maneuverable parachute in the world and today was no exception. While the pilot did not attempt to steer the chute at first, some rather rough looking terrain was coming up fast.  Trees and fence posts are not the most desirable of landing areas!

Turning the chute into the wind, the now first time parachutist managed to miss the trees but hit the fence line at about twenty miles per hour. The sudden stop was not the most welcomed of outcomes but the pilot realized that he was alive on the ground.

It is kind of funny how the human body works. You can sometimes suffer some rather significant injuries and still function in a rather normal capacity. Adrenaline and survival instincts are hardwired into each of us and today was no exception.

The pilot actually completed his post-landing checklist by detaching himself from the parachute by releasing the quick disconnects on the harness. He also took stock of where he dropped the seat kit that was attached to him while coming down. The seat kit holds some rather important items – a radio, food, water and in this case a rather useless one-man life raft. Basic stuff when you think about it, but even in a peacetime training environment these simple items may make the difference between living and dying.

Taking stock of his location, the young pilot realized that he had two options - He could go get the seat kit and use the radio to call Rescue or he could walk over to the nearby farmhouse and try to use the phone to call the base and have someone come get him. Since it didn’t appear that he was hurt, he elected to do both.  But first, he needed something to drink.

He felt as if he had cotton in his mouth and he could feel some of the effects of shock starting to take hold of his body. And then there was this streak of pain in the lower back that was starting to take over his conscious being. After retrieving the seat kit, the young pilot decided that it was time to take a seat and let everything from this point forward come to him.

Finding a cool place to sit, the pilot began to reflect on what brought him to this point in time…

So, you want to become an Air Force Pilot! The odds are not with you the recruiter told the new recruit. Only about two out of two thousand that apply actually make it to a flying position. But since you are transferring over from the Marine PLC program you may have a shot at getting a flying slot with us. But you’ve really got to want to succeed to fly airplanes in the military.
These words were to hold true in the coming months.

The real truth of the matter is, the military has to have use for you, i.e. want you! There are only so many flying slots to go around. It helps if you graduate from the Air Force Academy, but even this is no guarantee of successful completion of pilot training. Some very bright and accomplished students have washed out of pilot training and some not so bright and underachievers have gone on to fly some rather great aircraft. The only thing that holds true is that if the Air Force wants and needs you and you have the desire and discipline to stick with it, you’ll succeed the recruiter went on to say.

This sounds like a “Catch Twenty Two” the recruit thought to himself. School was always easy to him he thought. There will be no problem with graduating from college and flight-training academics should be no problem as well. After experiencing Marine Corps basic training, anything the Air Force could throw at him physically should be a breeze he thought. With nothing but positive thoughts of how he would succeed at this challenge, he was ready to sign up!

Awaking from his thoughts of the past, the young pilot could hear the sound of rescue vehicles in the distance along with the sounds of rotor noise from a helicopter coming toward his position. He readied his survival radio and made the call. “Rescue, Rescue, Rescue - This is Mustang three-two, I’m on the ground and ok.” My location is in a field next to a fence line about three-quarters of a mile west of a farmhouse just off of what I think is Highway 50.  Ready to pop smoke to mark my location.

Posted by Bob Novotney at 1:06 PM No comments:

Welcome to my blog

Add blog to our directory.